skip to main | skip to sidebar

The REAL cake pop chicks of the OC

I had so much fun last week, preparing for Easter. I really wanted to make the adorable cake pops that I saw on Bakerella

So, I got out all my supplies and set forth on this task:

First, I made a chocolate cake, and it wasnt just any old chocolate cake...no siree...nothing but the best for me and my friends, it was a Dove Chocolate Discoveries "cupcake kit" cake. (You can make cakes or cupcakes from this versatile product!) I baked it, and let it cool, look how serene it looks. It has no idea that it will soon be torn apart for some wild fun. 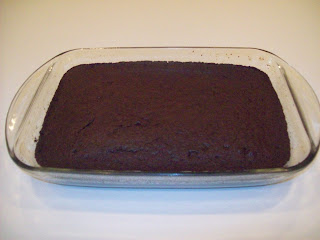 Next, it was time to make some frosting. Again, Im all about good taste, so it's Dove Chocolate Discoveries buttercream frosting (included in the cupcake kit)... 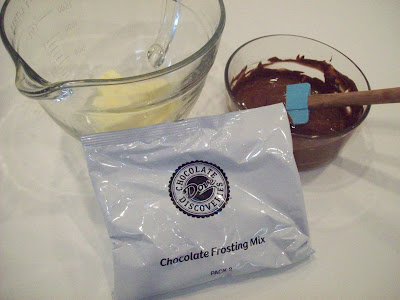 And, you might think, oh whatever with the frosting, but guess what, this frosting has REAL Dove chocolate in it! YUM! 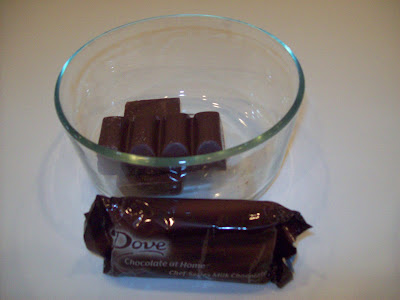 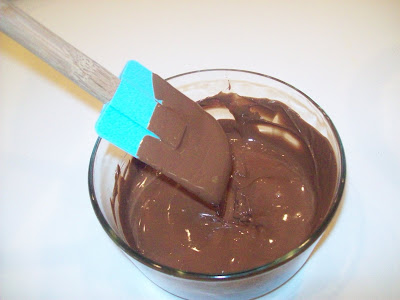 And, if Im going to stir up all that high quality chocolate, might as well be with a high quality rubber spatula, right???? 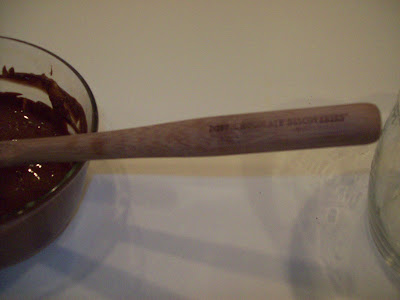 Ok, Ok, I promise this is not a Dove Chocolate Discoveries commercial, but I just wanted you all to see that cake pops can be high quality treats.

Now the frosting is complete. 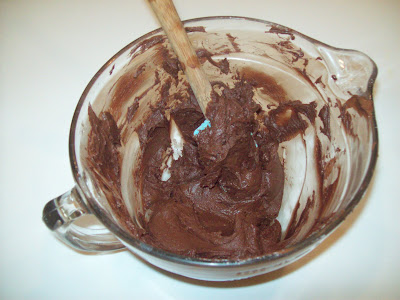 That poor, quiet, unassuming cake was torn to bits, broken into a fine crumb, and mixed together with the yummy frosting. After they were mixed well, I rolled them into balls and laid them out on parchment paper. 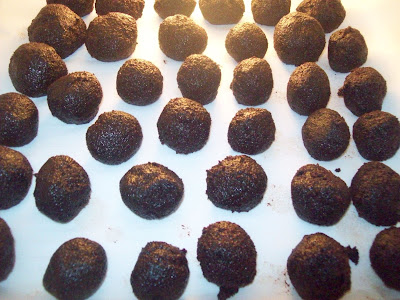 This was a lot of fun and I was getting so excited as my little chicks were taking shape. Although, I did have a few *teeny* *tiny* concerns about the little buggers...as some of them seemed, well, less than perfectly round. But I figured that would all work itself out.

While those little cake balls firmed up in the fridge, I took to sorting out the little noses and feet and hands.... 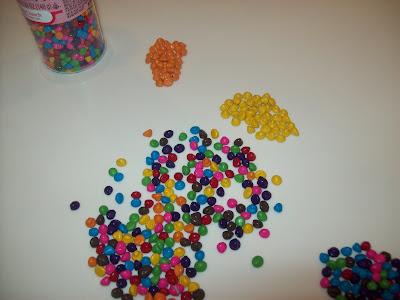 Soon it was time to cover my pops in chocolate. Now, I had a big dilemna of the moral type. I mean, Im all about chocolate, REAL chocolate, right? No fake, waxy "chocolate flavored wafers" for me! HOWEVER, I was making 2 batches of these chicks....about 40 that would be inhaled by 2nd graders, and another 10 for teachers with exquisite taste.

It seemed a waste, to dip the chicks for kids in real chocolate. Sorry, Im an ageist, Ill admit it right now! So, the pops made for kids got faux chocolate. I did use real Dove Chocolate Discoveries white chocolate (with yellow coloring) for the adult pops, and they looked identical, just an FYI (although, as the official taste-tester - WELL, someone's got to do it!! - I can tell you the real chocolate tastes even better!)

I melted my little wafers in a narrow coffee mug....I wanted more depth for dipping.... 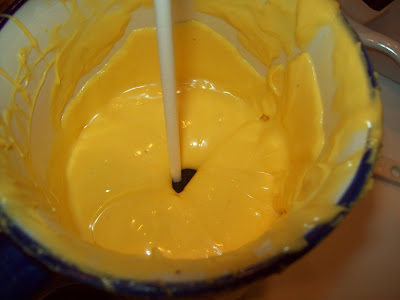 Here is the first chicky.... 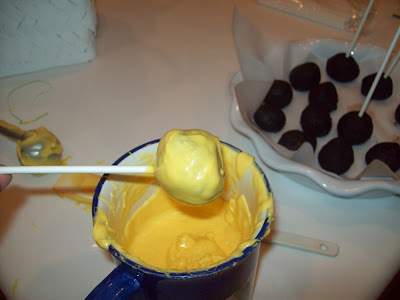 Ill admit, I was disappointed. I wanted a perfectly round, evenly covered chick. That's how Bakerella's look, that's how mine should look.

Chick after chick came out looking, well, less than perfect. 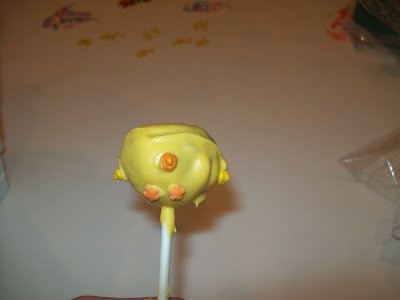 Now, earlier in the week, we had all gone and had our pictures taken. The very nice gentleman taking the picture was covered (and I mean, COVERED) in skin tags. I can tell you, that throughout the entire photo session, I was worried that my kids would comment or ask about his skin tags. Honest. Young children, might get curious and ask, "what are those bumps hanging off his face?"...and I feared it. But they didnt ask, but anyways....

I had asked My Honey,

"How does this guy look?"

I was feeling discouraged at the less-than-perfect appearance, and his response didnt help,

"It looks like that photographer we had for our pictures."

THANKS! Now I feel confident!

But you know, I realized, that nobody is perfect.

That photographer was a very nice man, and after a few moments, I hardly even noticed his skin tags anymore (ok, I did, but they didnt matter!) He was a person, a man made in God's image, and he was not defined by his outward appearance.

And, there are many other people that go around looking less than perfect (ok, mostly everyone) and it doesnt interfere with their ability to live meaningful lives, successful lives.

Take Donald Trump, with that hideous hair, he still has a nice life: 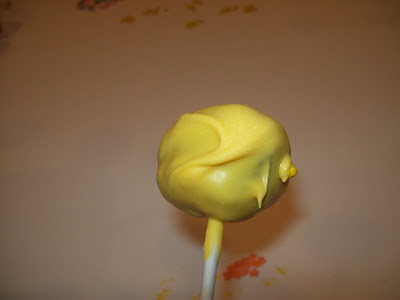 Perhaps living in the OC, and watching that horrific reality show, about the Housewives, has skewed my perception. That world where everyone looks perfect, it doesnt really exist, not even here in the OC....do you remember this post that I did? With the REAL housewives of the OC???

So, who cares of my chick pops look like they missed their botox appointment. They were adorable, with character and personality. Look at this guy, what mother wouldnt love that face!!?? 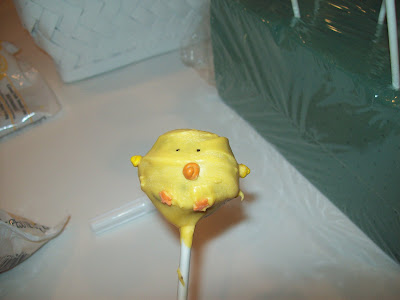 Actually, after a while, I sort of got the hang of dipping. And with the white chocolate, I let them dry with a generous coating (I wasnt trying to spin off all the drippy excess) and they came out even nicer.

But here is the clan, looking, well, cute, but kind of sad, as they were about to be devoured by hungry 2nd graders. No since getting all dressed up for that, right?? 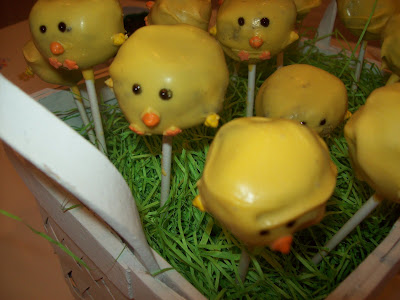 Posted by The Chocolate Lady at 4:24 PM

The Chocolate Lady
My name is Kim and Im a busy mom and social worker, who enjoys making festive desserts. I hope you will enjoy the step-by-step instructions, and find that it's easy to make fun treats.